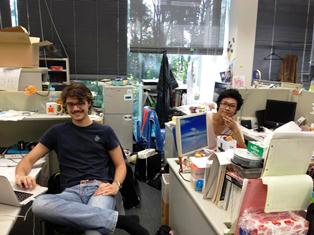 Japan - as a country, and as aculture - has always attracted me. As we all know about the Japanese level of technology, there was no question for me as to where to go for my researchinternship in computer science. The university I have attended for the lastthree years, École Polytechnique, and Keio University have strong links andpartnerships, and I found through my teachers the occasion to visit Keio SFC tostudy a new field of computer science: quantum computers.

Joining the AQUA team(Advancing Quantum Architecture) was a good opportunity for me to take a peekat the future of computer science. With a background in physics and mathematicsbefore moving to computer science, I did my specialization in networks andsecurity. As I wanted to keep close to these themes, I worked on quantumrepeater networks for my internship. This is a technology that will allow us tocreate networks of quantum computers in the distant future. This sametechnology should also be used for quantum key inscription and other quantumsecurity mechanisms in the near future. My job was to enhance an existingsimulator for such networks, and implement some quantum repeaterprotocols.

These four months ofinternship were also very rich in terms of personal and cultural discoveries. WithKeio SFC being located close to Tokyo and Yokohama, I was able tospend days and weeks getting lost in these metro-jungles. Needless to say, thecountry of all wonders has much to offer, as long as you make the effort toplunge into the Japanese life.