I joined a football club in Tokyo when I was 5 years old and kept playing after I went back to India. As I grew older, I started watching football on TV, and featured in programs such as Premier League Fans. At the same time, I was developing my interest in computer science too. I knew I wouldn't make it as a football player but didn't want to go solely into computer science either. Then I found the niche field of sports data analytics. The deeper I looked into it, the more interesting it became.

I chose the GIGA program for a multitude of reasons. The very first aspect that attracted me was the ability to build my own curriculum. Since sports data analytics was at the intersection of two very different fields (sports and computer science), there were not any reputable universities that offered a course on the subject for undergraduate students. With SFC, though, I realized that I would be able to tailor a class schedule for 4 years that would allow me to engage in this emerging field while also allowing me to explore other interests.

The seminar structure was also unique and appealing. It allowed for extremely in-depth research from just our second year, something that not many universities offer. At one point in time, I was a part of two seminars that engaged in completely different research--Professor Rodney Van Meter's quantum computing seminar and Associate Professor Masahiro Kotosaka's business management seminar--which allowed me to do research in both fields separately, while also spurring me to find connections with these two seemingly unrelated fields of research.

Getting involved in the industry

The many opportunities to learn from experts in various fields within SFC, and outside (through SFC connections) was a crucial factor for choosing GIGA. While I was in Professor Van Meter's seminar, I got to go to an IBM quantum computing hackathon. It was different to a traditional hackathon in that we had the opportunity to interact with and be mentored by experts within IBM that were working on the same technologies we were using in the hackathon. There was a real connection with the industry which allowed us to put our research into a bigger context. This is completely different to the academic-only approach that most universities take.

In my second semester, I joined a startup headed by Associate Professor Masashi Aono. It was a robotics startup called "Amoeba Energy." At the time, robotics wasn't at the forefront of my interests, but the year I spent working there was extremely fruitful in terms of developing my technical skills and also my interpersonal skills and learning about business development. Working at an early-stage startup allowed me to experiment with technologies, and more importantly, not be held back by the fear of failure. Moreover, since the company only had about 5-6 employees, I was also involved in quite a few important business decisions. The business side was extremely enriching and piqued my interest, which led me to joining Professor Kotosaka's seminar on management. Once I was a bit more proficient at Japanese, with Professor Tomohisa Nagano's help, I was introduced to people within the football data analytics industry in Japan and paths for further collaboration in the future were opened.

Finding my way at SFC

Three years ago, I would have said that I want to work at a football club in Japan or Europe as a data analyst. A lot has changed since then. The kind of experiences I have had at SFC have made me rethink my future goals. Entrepreneurship is something I have been thinking about more seriously, and that is the route I want to take after I graduate.

During the COVID-19 lockdown I was in India, and I used this time to take a good look into the Indian startup market. That's how I found my way into a job at a startup incubator and venture capital company in India as an entrepreneur-in-residence. Without my previous experiences, I would never have been able to land this job, and the experience I gained from it improved my market research and business development skills immeasurably.
If we have learnt anything from COVID, it is that the world is filled with uncertainties. And in such an uncertain world, it is important that one not only takes a microscopic view of their field but also a macroscopic view of the world. The opportunities you will get here to do so are unparalleled. Even if you are not actively seeking them, they will be presented to you. You just have to be able to take hold of them and enjoy them to the fullest! 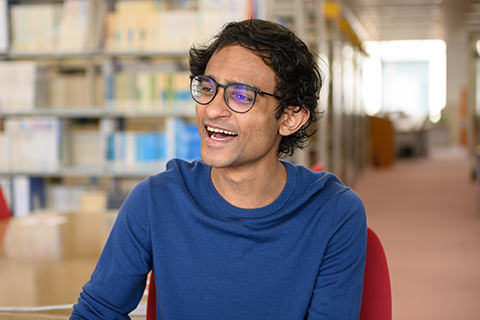 Currently I'm the president of the Association for International Students at SFC (AIS), which aims to bridge the gap between the administration and the student population at SFC. We believe that what makes a great university is great communication between students, faculty, and administration. With GIGA also being a relatively new program, it is essential to have a continuous feedback loop between the faculty, administration, and students to create a better learning environment for everyone. We also aim to make student life easier by providing opportunities for international students to explore the various seminars and circles at SFC via orientations we run, along with a few of our networking and party events. Although over this last year, they have unfortunately been cancelled because of COVID-19, we cooperated with the Office of International Affairs to the host the Online Freshmen Session, an orientation for first-year students, and we organized several online events to help students get up to speed with university life.

Q) Did you face any difficulties when you started a new life in Japan? Were you able to get support from the university?

A) Moving to a new country always has its challenges. With Japan this is especially true because of the language barrier many international students will face. However, since everything is so systematized, it isn't as prolonged of a learning curve as one would expect. It took me about a week or so to get used to general life here - how to interact at convenience stores, how to use an ATM, how to order at restaurants, among other things. My recommendation would be to make a few Japanese friends who will be willing to help you navigate life here in the first few weeks.
The university helped with quite a few administrative tasks that had to be completed. There were also a few support sessions planned for students in my year to help us get our residence cards, SIM cards, and open bank accounts. These processes are a bit drawn out in Japan and so it was great to have someone from the university helping us out.

A) I have lived in both. Although I currently live in an apartment, I spent my first two years in a dorm in Shonandai. The advantages of a dorm apart from the food is that you already have an established community. I made a lot of friends in my first year here through my dorm. The dorm managers, a couple who also takes on a parental-like role, also offered support when I needed it. For someone coming straight out of high school, I would recommend living in a dorm for your first few years since it'll be a great way to adjust to life in Japan. Most dorms also offer meal options.
I live in an apartment now which also has its advantages. First, it's a lot more spacious and has a kitchen, a bigger bathroom, and much bigger bedroom. It's also a lot quieter which is a bit better since I can focus on tasks at hand without getting distracted as much. There are also no restrictions on visitors or a night curfew which is also ideal.

Q) How much is the cost of living in Japan? Do you receive any scholarships? If you have a part-time job, please tell us about it as well.

A) The cost of living really varies from person to person, but mine ranges around 100,000-120,000 yen a month. I receive the Masatada Kobayashi scholarship which is about 1,000,000 yen a year. I also work part-time at a sports analytics firm.